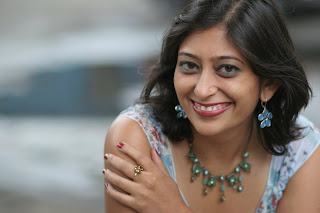 Purvi Shah serves as the Executive Director at Sakhi for South Asian Women, a community-based anti-domestic violence organization. Her debut book of poetry, Terrain Tracks (New Rivers Press 2006), won a Many Voices Project prize. Among other places, her poetry has been published in Borderlands: Texas Poetry Review, Brooklyn Review, Many Mountains Moving, The Massachusetts Review, Meridians, Natural Bridge, NuyorAsian, and Contours of the Heart: South Asians Map North America (which won an American Book Award in 1997.) She served as a poetry editor for The Asian Pacific American Journal, has been a Kundiman fellow, and received the Virginia Voss Poetry Award at the University of Michigan. Her research for her M.A. in American Literature from Rutgers University delved into 19th and 20th century women’s and Asian American anthologies.

Q: Name one collection of poetry that you wish you had written and why.

Who am I not to covet brilliance? I would have been bliss-filled had I written many a collection of poems including Agha Shahid Ali’s Half-Inch Himalayas, Rita Dove’s Thomas and Beulah, Li-Young Lee’s Rose, Paul Monette’s Love Alone, Ntozake Shange’s for colored girls who have considered suicide when the rainbow is enuf – or even the oeuvre of Lucille Clifton, Audre Lorde, Adrienne Rich, and Emily Dickinson. And, yes, T. S. Eliot, Edgar Lee Masters, and Robert Frost too – and not just so that every school kid would be forced to ingest my work but for the love of rhythm, place, and the urgency of living.

For all these reasons and more, though, if I had to settle on one poet – a mandate I don’t subscribe to (my essay in the recent Poet’s Bookshelf attests to that) – I’d elect John Donne’s works. The Holy Sonnets are to be relished – I return to “Death be not proud” and “Batter my heart, three-personed God, for You” each time with amazement anew. I love that Donne’s poems are arguments – that he delves into the paradoxes of life, and, yes, that he puns unceasingly. The mix of faith, human foibles & concerns, and passion in a language of rumination open imagination – and leave me learning, questioning, contemplating, and feeling more through each reading. If my poems were to reach such level of craft and felt knowledge, I would be done.
Q: Describe the place/physical location where you write most regularly.

My job is demanding. It leaves very little room for rest, much less room for writing poetry at leisurely stretches. So I write when & where I can – which is usually on the New York 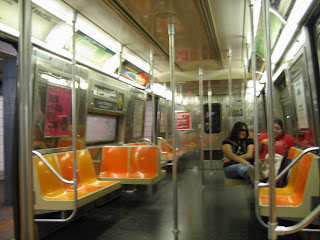 City subway in my travels through the day. My poems often plumb aspects of migration – it’s fitting that I write on the move. I keep a small journal with me to brainstorm and to craft starts & shells of poems. On another trip, I’ll revise on the subway in this same journal. When the piece feels close to fruition – or when I’ve hit a wall – I’ll write up the work on the computer in my bedroom or kitchen. I’ll ponder ideas, sequences, & word choices, make edits and slash, and then print out the piece so that I can take it on the subway the next day to see if the poem feels ready or right. Mornings being with promise – that expectation of travel and the desire to see what arises in this room of journey.

The subway has become my writing sanctuary and taskmaster. Given time is tight, I focus and deploy short bursts of generating material and revising. Being in the world as I write brings me images, concepts, and words I would not necessarily have settled on had I been writing in the serenity of my home. Since my mind works through association and stitching information, the subway offers a vital space where I can gather and reflect. While I often seek a stretch of day where I could write and write and write, I know that my subway scribbling has a power of its own – and has brought me many an unexpected moment of excitement and joy in language, line, and poetic production.

Q: What South Asian themes are you interested in exploring in your work?

The poems in Terrain Tracks explore migration as potential and loss. They are keenly aware of the context of immigration – as highlighted by the “Immigrant Song” sequence. You can go to Sandhya Nankani’s Literary Safari blog to get one take on the final piece in this lyric sequence. As with other immigrant and/or postcolonial subjects, I’m interested in exploring movement, women’s shifting positions, and American culture.

I also love trains from my early memories of India riding the rails within the hubbub of milkwalas and fellow sojourners and the landscape shifting from dust to fields to dust. In America too, the journey by train carries you through landscape otherwise unseen and brings me a calm and unique topos of rumination. Those elements – as well as a love of nature, science, human exchange, and the urban geography – coalesce in my poems. For example, “Signs there is a hole in Manhattan,” reflects on 9/11 from the vantage of reportage, highlighting the confusion of subway travel – with the frame of a South Asian American New Yorker who lost a friend in that tragedy.

This is to say, as we all know, that identity is complex and experiences (& insights) cannot be predicated on labels. And yet, identity cannot also be javelined. My new work – in conversation with visual artist Nandini Chirimar – examines faith and objects of Hindu worship. At day’s end (and start), what motivates my poetry is a quest for knowledge, a desire to map feeling, and a love of the sensual imagination. What I crave to hear most, though, is what as readers strikes you about my work. Poetry is an amazing avenue of exchange and dialogue – I feel most satisfied when I hear what my poems evoke. That is the subway reaching, after many twists & turns, its destination. 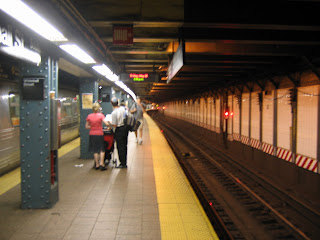